Launched during the recent Re:Invent conference, Graviton3 forms the next generation of AWS’ own Arm-compatible server processors. They use “up to 60% less energy” and deliver a 3x performance boost for “CPU-based machine learning workloads”.

So why are Graviton3 processors better, how do they work, and are they worth the hype? But before we analyze these questions, let’s start with the basics.

What are Graviton3 server processors?

AWS Graviton3 is more energy- and cost-efficient, and provides a great compute performance boost. It provides a significant improvement in the range of choices available for customers in selecting EC2 instances, while delivering better server performance, availability and security, and lower costs.

For the first time in cloud history, the new C7g instances powered by Graviton3 processors are equipped with DDR5 memory, which offers 50 percent more bandwidth than the previous DDR4 memory option.

The evolution of AWS Graviton processors 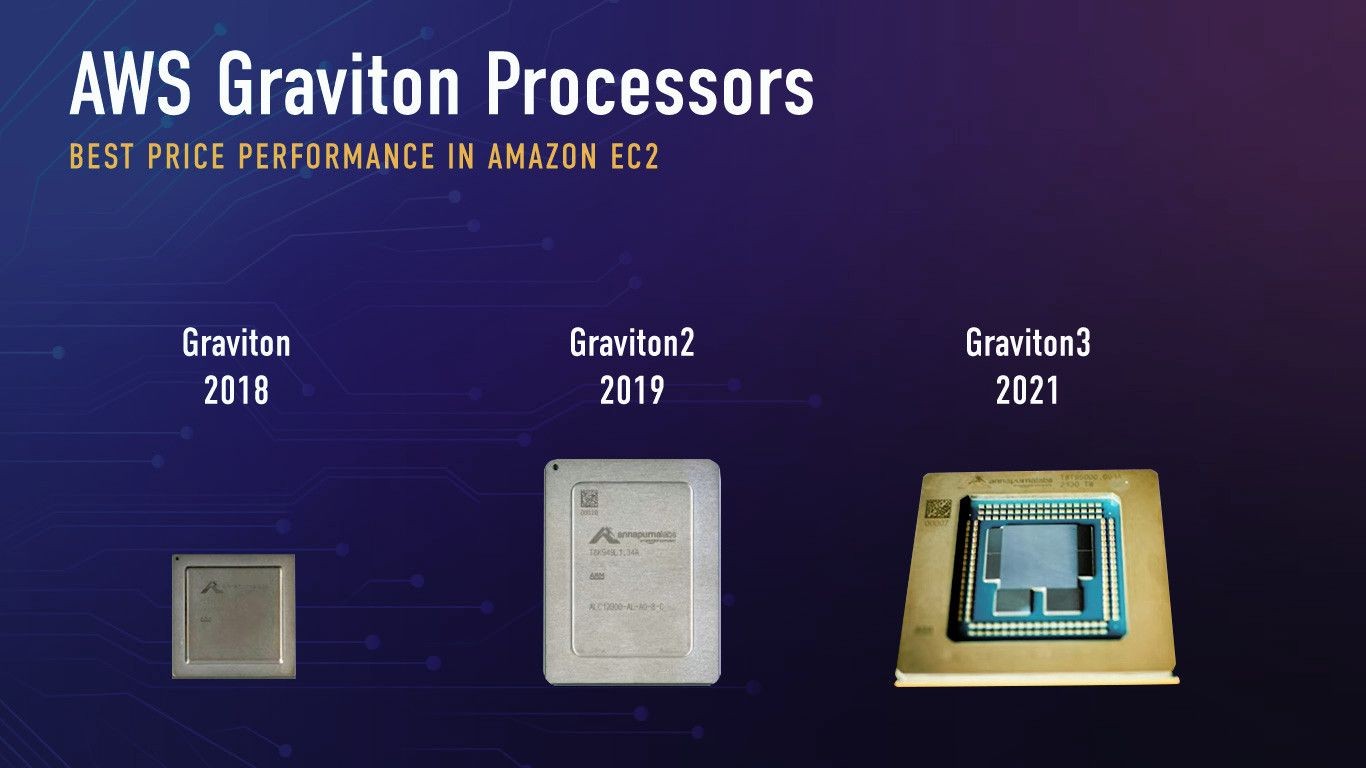 In 2018, AWS felt they were getting over-dependent on third-party vendors for their server processors. Rather than depend on the innovation of chip majors like Intel or AMD, they chose to develop processors in-house. AWS Graviton processors were launched in 2018 using open-source Arm architecture. Arm’s pointer authentication mechanisms provide an extra layer of security. AWS Graviton processors were designed to specifically suit the way that AWS works and deliver the best price performance for Amazon EC2 instances.

Over time, the first generation Graviton processors proved their benefits over X86 processors. Though they were seen as struggling to catch up to the big players in the chip industry, the first-generation processors consumed less power when used to power EC2 instances, than the X86-based server processors developed by competitors.

Up to 3X better performance with Graviton3 server processors

Up to 60% energy savings

When you run your business’ workloads on AWS cloud, you can significantly lower your carbon footprint (when compared to an on-premises data center). That’s because AWS focuses on efficiency and continuous innovation in all aspects of its global infrastructure, uses more efficient power and cooling systems, and is moving towards 100% usage of renewable energy for all its operations.

If you are looking for ways to adopt sustainable practices into your business and data architecture, AWS offers a number of tools to help, including “Amazon Cloud Watch for easy monitoring and optimization across tools [Amazon Elastic Compute Cloud (Amazon EC2), Amazon Elastic Container Service (Amazon ECS) and Amazon EMR]” and others.

A great way to optimize workloads is by using Graviton3-based instances. Since they are more efficient, fewer instances are required to run the same workload, reducing the cloud resources utilized. “Graviton3-based instances use up to 60% less energy for the same performance than comparable [X86-based] EC2 instances”. Using Graviton3, you can reduce your carbon footprint and achieve a much better “performance per watt of energy use” in Amazon EC2.

Great for industries with compute-intensive workloads

Graviton3 processors were created with the intention to power compute-intensive workloads. They’re suitable to improve the performance of mass data processing and reduce the infrastructure cost of lightweight web application infrastructure. Graviton3 delivers “up to 25 percent higher performance, up to 2x higher floating-point performance, and 50 percent faster memory access based on leading-edge DDR5 memory technology compared with Graviton2 processors”.

Graviton3 is more stable in the face of traffic spikes. EC2 instances powered by Graviton3 also gain scalability, security and a wider range of choices – most important when the workloads are compute-heavy and business-critical.

Since Graviton offers better performance, CPU utilization reduces and thus, so does the total cost of ownership for the EC2 instances. One AWS client realized 87% TCO savings by moving from X86-based instances to Graviton-based instances.

Most application languages and most open-source software services support Graviton instances. This means the cost of various instances reduces with a drop in development cost. In addition, the Graviton3 server processor allows you to reuse code written based on common business logic for desktop and mobile applications.

Migration from other server processors to Graviton is seamless, with almost no code changes required. This reduces the time and cost associated with development and migration.

Graviton processors are not currently supported by Windows. This is something to be kept in mind when choosing your server processors.

Graviton3 is a must-have for certain industries, especially those with compute-heavy workloads. Some usecases include:

So how do you get started?

Speak to an AWS Graviton Ready Partner to discuss how to move forward. The AWS Graviton Ready Program empowers AWS Partners with a range of software products and solutions to build, integrate, deploy, monitor, support and secure Graviton-based Amazon EC2 instances. “These solutions have been technically validated by AWS for their sound architecture and proven customer success”, and are ready to integrate with all AWS services. This makes moving to Graviton-powered instances easier.

AWS Graviton Ready Partners vet the solutions available to help you validate, optimize and support applications of their choice on Graviton-based instances. By leveraging the right solutions, Graviton users gain a consistent experience on Graviton instances as on others. This provides parity for customers to choose the right EC2 instance for their workloads by optimizing price and operation performance.

With Graviton3-powered EC2 instances, you can improve the performance of your application and reduce total cost of ownership. Ziffity acts as a tech partner for businesses interested in migrating their workloads to the cloud. Allow us to help you on your AWS journey.

Sustainability is very important to me. Would Graviton3 be suitable for the requirement?

Is Graviton3 significantly better than Graviton2?

Yes, Graviton3 has shown up to 3x improvement in performance over Graviton2 processors, depending on the workloads being run. Twitter found that “Graviton3-based C7g instances deliver as much as 80% higher performance vs. Graviton2-based C6g instances, while also reducing tail latencies by as much as 35%.”

Get the latest on eCommerce and Cloud

Get the latest on eCommerce and Cloud

Get the latest on eCommerce and Cloud Join our LinkedIn Newsletter